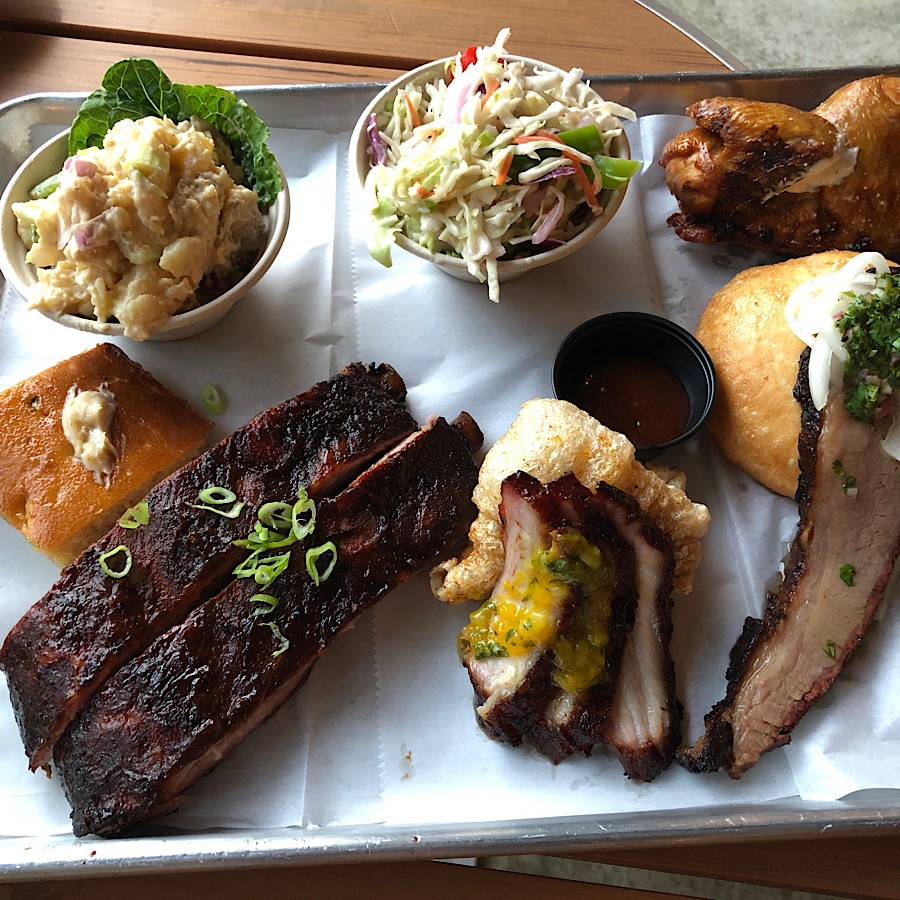 One set of trade-offs we are constantly having to weigh is the desire to explore our destinations deeply vs. the risk of being in the Caribbean hurricane zone during the summer months. We worked out a deal with Gratitude’s insurer in which they pay for any hurricane damage as long as we keep the boat below a certain latitude (12° 40’, by August 18, to be exact). Now, in order to hold up our end of the deal, we have to make some tough choices. We can’t spend weeks at every island! Oh, this is heartbreaking, I tell you.

I had really looked forward to savoring Puerto Rico. We visited for the first time about 4 years ago, just to San Juan and a day trip to El Yunque Rain Forest. That was enough to whet my appetite – and I choose that phrase deliberately, because the food here is – ahhhhh, scrumptious! So when we started our planning for this venture, I envisioned exploring all kinds of little towns and islets – Ponce, Salinas, Fajardo, Culebra, Vieques. There are colonial squares! Bioluminescent bays! Golden beaches! Reefs to dive!

Alas, we experienced only a smattering of the above. Our time in Puerto Rico was mostly utilitarian: provisioning (Costco!), tracking down engine parts (West Marine!), locating technicians, and getting sail and rigging repairs done. We were warned, a while back, that the cruising life consisted of “Repairing your boat in exotic locations.” So far that’s been accurate. Plus, there are only so many weeks left before August 18, and so many islands left to discover. We haven’t even reached the US or British Virgin Islands yet! And those have been high on my bucket list.

That said, there were a few highlights to our limited shore time in Puerto Rico. One pleasant surprise occurred when we anchored at Puerto Patillas, on the southeastern shore. We’d read about it on Active Captain, which is kind of like Trip Advisor for sailors, with reviews of anchorages and ports. Other sailors reported that there were restaurants within walking distance of the shore, if you can find a place to leave your dinghy. That’s no small thing, as many of the docks and boardwalks on the southern coast were destroyed by Irma and have yet to be replaced. So we decided to try it with full knowledge that we might just have to return to the boat and throw together a quick dinner instead.

We could make out one obvious dock at a distance, but we couldn’t tell whether it belonged to a restaurant or a residence. As we got closer, we saw a porch and some people sitting on it, but then it was suddenly clear – this was someone’s home, not a public place. So we kept going. But then we heard a guy calling from that dock, and waving, so we turned back – maybe he could tell us where we could find a place to tie up.

Turned out the guy (and his friends/family on the porch) was a fellow cruiser, house sitting for friends! They kindly offered to let us use their dock, and invited us to sit and visit a while. We had a delightful time trading sailing stories and getting advice; our hosts were 13 years into their live-aboard adventure, and full of wisdom! We felt like we’d stumbled into a gold mine. After our visit, we left them to their dinner while we walked into town to find our own. But we traded contact info, and I made a new Facebook friend. We hope to link back up with these nice folks when we’re all down in Grenada later this year.

The other really nice thing that happened in P.R. was that Andy found us one of the BEST RESTAURANTS EVER. Seriously. We’d been in Fajardo several days, eating on the boat or at the marina restaurant, when he took it upon himself to look up some other dining options. So the last night we had our rental car, he didn’t tell me where we were going.

We ended up at an old gas station off the side of a winding road, with nothing else around it. It looked, at first, like the rain forest had overtaken it. But as we walked up, we realized that this was going to be an ultra-cool place. La Estacion is a barbecue joint of sorts with a multilevel outdoor deck, tropical plants scattered around, and the menu scrawled on a giant moveable blackboard. Our server was one of the owners, and he described (with passion!) all of the menu options – how long they were smoked, how they were spiced, how big the portions. This was a man who cared about food! He steered us toward some custom cocktails and then we ordered a big sampler platter of chicken, beef brisket, ribs, and pork belly. OH. MY. GOODNESS. If I lived in Puerto Rico I would eat there every day and grow as big as a house. But I would be very happy.

It was nice to have a special last evening, because the following day was all work! The sail riggers returned “first thing in the morning” (translation – “lunchtime”) to put up our restitched jib and Code Zero and to rig the reefing lines on our mainsail. The factory engine tech (for whom we’d been waiting almost a week) finally was able to squeeze us in to take a look at our starboard engine. (You may have noticed by now that we keep blowing out impellers; he helped us figure out some of the problem, but we still have more issues to resolve.)

Finally, about 2:30 p.m., the work was complete and we could get underway. We knew we did not have time to get all the way to St. Thomas, where we had friends flying in the next day. So we used our remaining hours of daylight to shoot east to an anchorage off the coast of Culebra, a part of Puerto Rico also known as one of the “Spanish Virgin Islands.” I had really hoped we could linger on Culebra a few days and check out the quiet beaches and awesome snorkeling. But we resolved that we’d hit it on the way back in a few months. Not too disappointing, especially when you consider we’d be spending the next two weeks, with friends and then family, in the US and British Virgin Islands.